Since the 12th century fishing on the stretch of water from Carlisle to Solway Firth has been documented through royal charters and legal disputes. The provision of fish to medieval Carlisle was very important. Fish vital part of the diet during 17 and 1800’s. The fishery at King Garth was mentioned repeatedly in royal charters and in 1733 the Mayor of Carlisle was empowered to contract for the purchasing or leasing of a piece of land for a house for the farmers of the fishery at King Garth. The fishery was located 3.5 miles from Carlisle City Centre I mile north west of the village of cargo the site of King Garth fishery must have provided good quantities of salmon being located close to the mouth of the estuary. The King Garth fish house is a two story whitewashed building located on the bank of the river Eden. Overtime a change in the course of the river brought about disputes between Carlisle Corporation who owned the rights to the King Garth fishery and Lord Lonsdale who owned Burgh Barony resulting in the fishing in King Garth being leased to the Corporation by Lords Lonsdale who then farmed it out to local farmers. Ultimately the reduction in fish stock and consequently the rise in price meant the fishing rights were no-longer viable and the fishery was abandoned. Mayoral dinners were then held at the fish house until 1892. 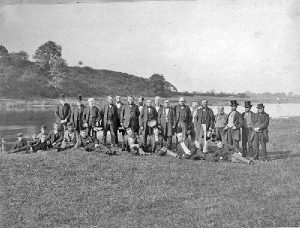