The Kingmoor Ring was found at Greymoor Hill, near Kingmoor, a couple of miles north of Carlisle – locals will know this is now the location of Junction 44 on the M6. As is often the case with these old finds, it was found in a completely unremarkable way. A young man was hammering away at a wonky fence some time in the very early 1800s and came across it in the ground. It was in the possession of the Earl of Aberdeen by 1822 and was passed to the British Museum in 1858.

The Kingmoor Ring is gold, with a diameter of 27mm. There is an inscription on it in runes, permanently blackened with niello so the letters still stand out over 1100 years after it was made (that would have confounded Sauron). Another near-identical ring, known as the Bramham Moor Ring, was found in West Yorkshire in the early 18th century.

To quote the British Museum, ‘various attempts to decipher the inscriptions on these two rings… are not regarded as successful. … the sense is very probably magical’1.

The words have been transcribed from runes asærkriufltkriuriƥonglæstæpon tol. The ‘ærkriu’ part is believed to be a spell to stop bleeding, which is also found in a 9th-century anglo-saxon medical manuscript known as Bald’s Leechbook. The rest of the phrase isn’t strictly logical but includes words and terms seen in other known charms2. It does include an Irish phrase for ‘stream of blood’ and a reference to alder.

There is a replica of the Kingmoor Ring at Tullie House Museum in Carlisle. 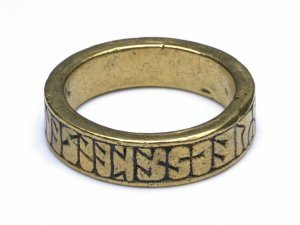